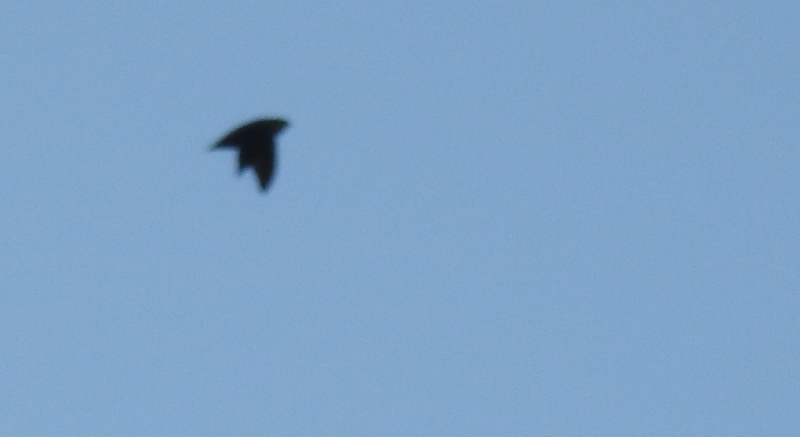 I love birds, but until recently Chimney Swifts were unknown to me. Last year the Assiniboine Park Zoo, added a chimney on their property that had been used by Chimney Swifts, but I think the building it was on was being demolished. This chimney is not at an easy to see location, and I would look towards it any time I was close by, but never did see anything that I thought might actually be a Chimney Swift. Thinking back though, I kind of remember seeing what I thought were Swallows in the area.

Fast forward to a few days ago, when I could hear birds outside my window and I had no idea what they were. I could see them flying by, but very fast and they resembled swallows. They didn’t sound like swallows though. The app on my phone included Chimney Swifts in the “looks like Swallow” area and when I clicked on the sounds made by these birds, I was pretty sure that is what they were. There is a chimney on the building across the street.

These birds are listed as a threatened species and I contacted the Manitoba Chimney Swift Initiative to find out from them if what I thought I had across the street were actually Chimney Swifts. It was confirmed that Chimney Swifts have been seen around the 2 chimneys on that building – although I can only see one of the chimneys from my window.

This morning, I managed to get one very out-of-focus and blurry photo of one of the Swifts as it swiftly flew by. For a better photo, you can look at the Manitoba Chimney Swift Initiative – What are Chimney Swifts? page.

The Chimney Swift does not perch. It flies or it clings to a vertical surface (such as the inside of a chimney). The metal chimney inserts often used now have made many chimneys impossible for them to use, since they cannot cling to the surface of them.

The best way to determine if the birds are using the chimney to nest in or just to rest during the day is to observe the site for about 30 minutes before and after sunset. Unfortunately, I am busy with Africam at that time, but will see if I can set up my camera to record the activity. I am not sure how long or how much I can record – but I will give that a try tonight (hopefully).

Hi - I'm Mavis. I love to travel, I love to take pictures and I love to write about whatever comes into my head. View all posts by mavimet

3 thoughts on “Chimney Swifts in My Neighbourhood”