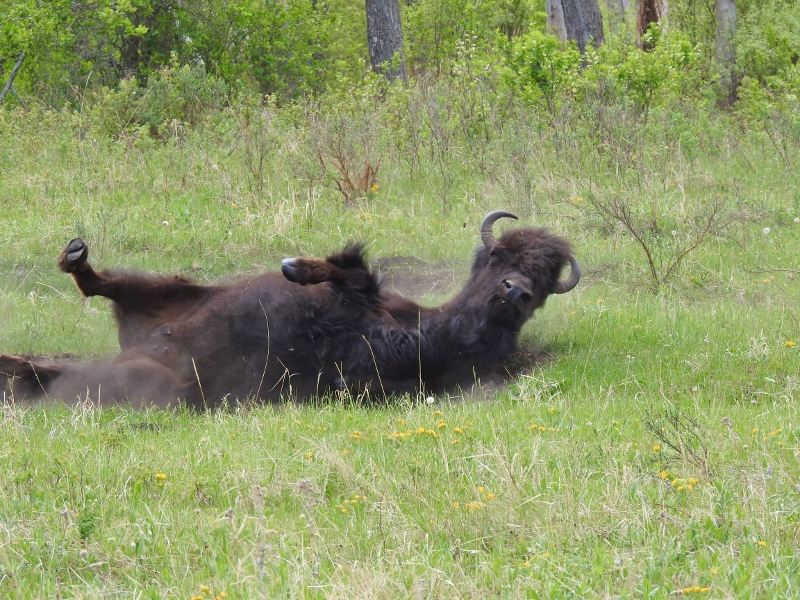 After my little mid-day break, I headed back out to see what I could find. Instead of going back into the park, I went south a bit after getting some information on lakes with a nice variety of birds along a road nearby. My first photo wasn’t a bird though. As I rounded a corner, I could see something black out in a field, so I thought it must be a Black Bear. It wasn’t.

Then, I headed back to the park and I finally found a Dragonfly that was willing to post for a photo!

I also saw another Great Blue Heron – but he saw me first again and took off flying . I did get a couple of photos of him flying away.

Then it was back to the Bison enclosure and four of the Bison gave me some great photo opportunities. 🙂

Because I had a late night last night and an early morning this morning, I decided that just one more drive to north of Moon Lake and I was going to be calling it a night. No sightings, but I did pick out one the the trails that I would walk next time I am in the area. It is a very short walk (which is what I like when walking alone).

It started raining that evening and was still raining in the morning so I had my breakfast at the Honeycomb B&B and headed for home early. It rained off & on for the entire drive.

Hi - I'm Mavis. I live in Winnipeg, MB, Canada. My addictions include Africam, popcorn and chocolate. I love all critters, I love to travel, I love to take pictures and I love to write about whatever comes into my head. View all posts by mavimet